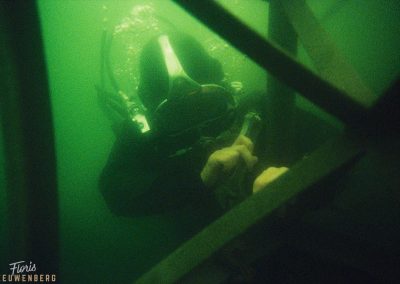 The dive platoon is at work underwater. “It’s a piece of cake on land”, says de Bruin, “but underwater it’s rather difficult because you have to do everything by feeling your way around.” 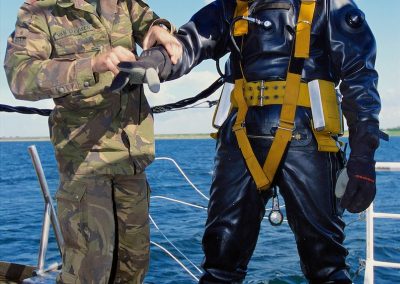 No detail is left to chance

No detail is left to chance, wetsuits must be water-tight and this includes the gloves. 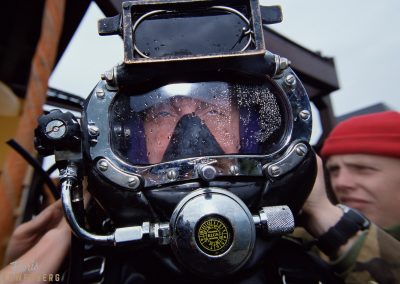 In this diver’s eyes clear effects of the so called Martini Law are visible, for every ten metres you dive, it feels like you’ve knocked back an entire glass of martini.also known as nitrogen narcosis 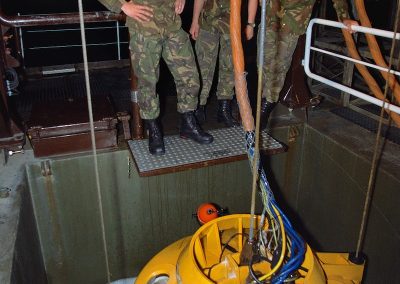 Observing the diving bell on the special training ship of the Royal Dutch Army, the ‘State Vessel’ 50. 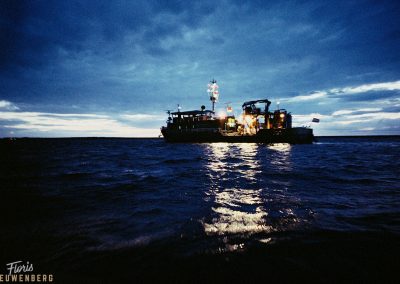 The ‘State Vessel’ 50, the pride of the Royal Dutch Army, a special training ship with full training facilities on board including a decompression tank. 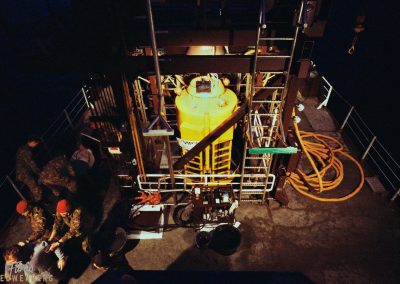 After a dive the men perform a fast striptease

After a dive the men perform the quickest striptease. Their colleagues on deck help them take off the diving equipment within three minutes and rush them to the decompression chamber. 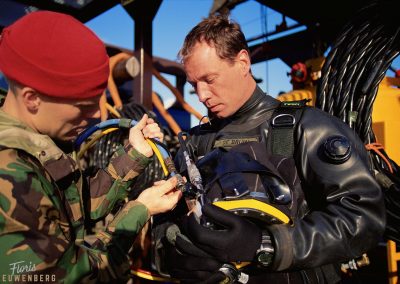 Sergeant Major Robert de Bruin of the 105 Bridge Company of the Royal Dutch Army checking his hoses before descent. 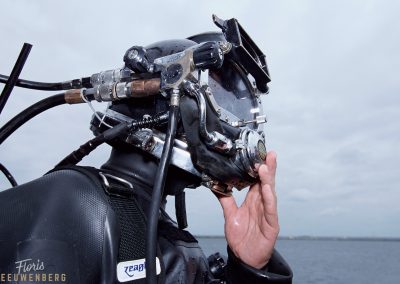 Diver in SSE (service supply equipment) outfit, this equipment is the most convenient if he needs to work in strong current conditions and is also safer, since it provides a constant air supply. 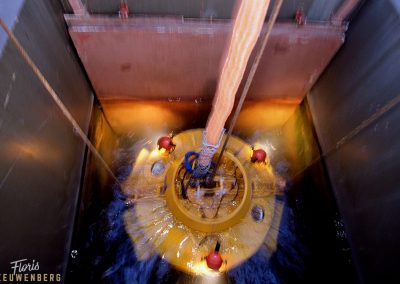 The diving bell is sent to a maximum depth of 50 metres with two divers in it. 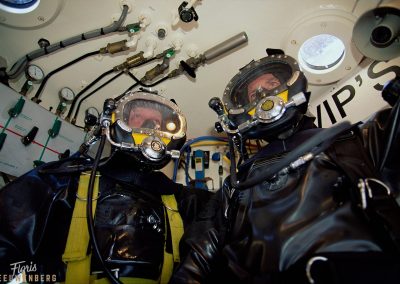 Two divers ready to go deep for the nitrogen narcosis test. Once they reach the 50 metre depth they receive instructions from the ship above and have to perform a number of exercises. They spend between 30 and 60 minutes in the diving bell. 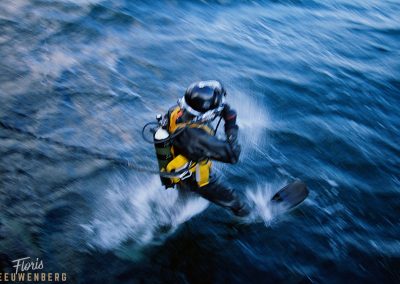 Diver jumps overboard, his task underwater will be that of checking his two buddies inside the diving bell (bathysphere). 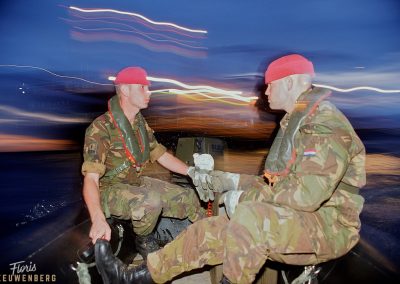 Once the mission is over, all signaling buoys and anchors are weighed, there is no need to keep the area clear of other vessels now. 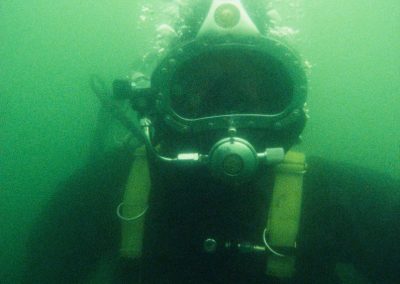 Murky water, this is the typical environment where military divers are trained, visibility is very scarce and most of the tasks are carried out by ‘touch’. 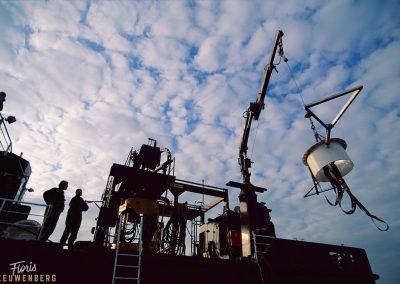 The module to complete the underwater structure is lowered into the water, the piece is left to sink until the bottom, then it will be carried by two divers to its exact position and joined with the other modules. 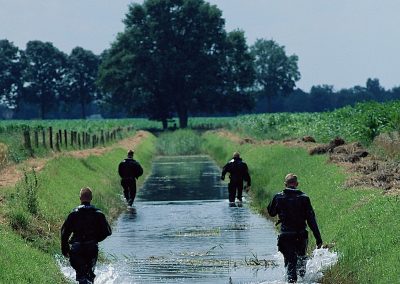 Part of the physical training involves marching in extreme conditions in full gear, this proves particularly tough because the diver must carry several kilograms of equipment and he can feel his body temperature rise to 38 degrees Celsius or more. 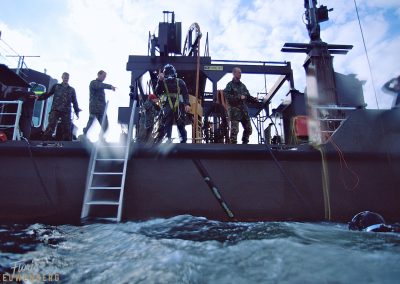 Time for another shift, as one pair of divers ascends, the next two descend to continue the work on the bottom. 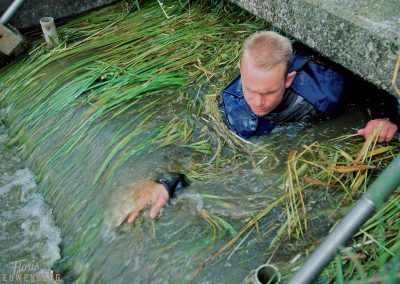 Trained to dive in any condition

The underwater soldiers are trained to dive, with or without air supply equipment, in any condition and practically anywhere. 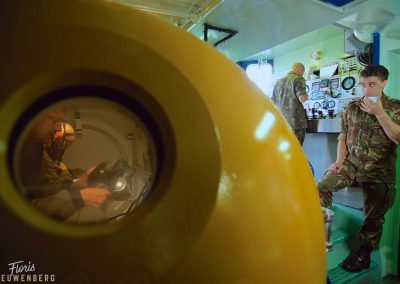 Divers kill time in the ç 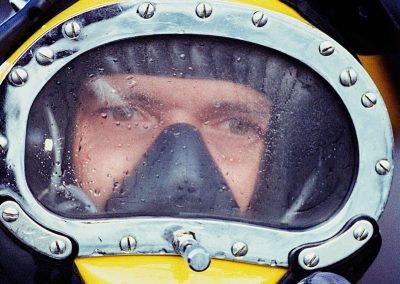 Diver in SSE outfit, the equipment is checked three times before he jumps overboard. A small defect in the system could cause serious consequences during the dive. 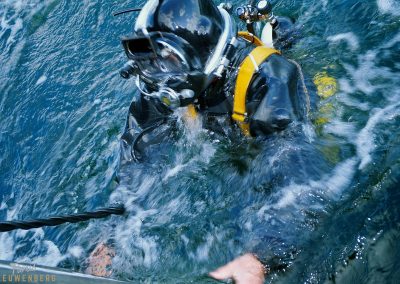 Diver holding onto a rope before starting his gradual descent, he will have to make a few decompression stops before reaching the bottom. 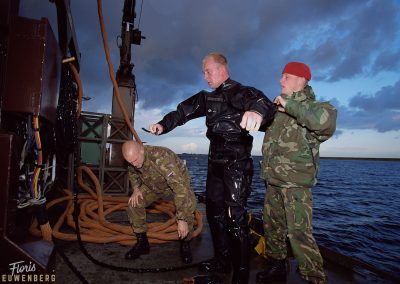 Major van den Pat bosh checking his watch to assess immersion time while one of his mates quickly unzips his dry suit. 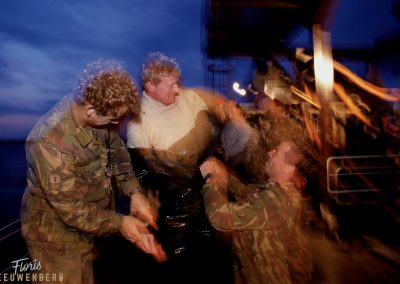 Fast striptease before going into the decompression chamber.

A very fast striptease before going into the decompression chamber. 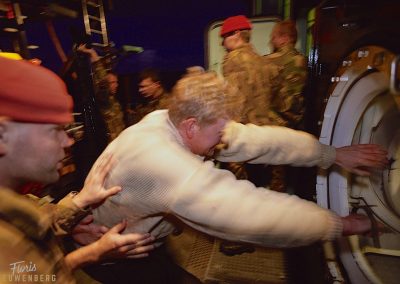 Pushed by their fellow soldiers into the decompression chamber

After performing the fastest striptease, divers are literally pushed by their fellow soldiers into the decompression chamber, where they will remain until the nitrogen levels in their blood are back to normal. 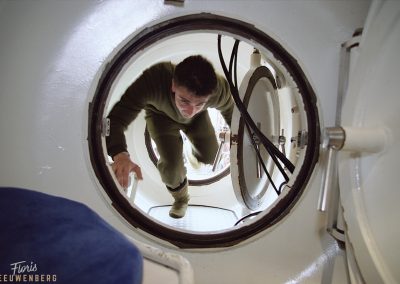 Rush into the decompression chamber

Only minutes after ascending from a dive, divers have to rush into the decompression chamber, every second is valuable in order not to put the diver’s safety at risk. 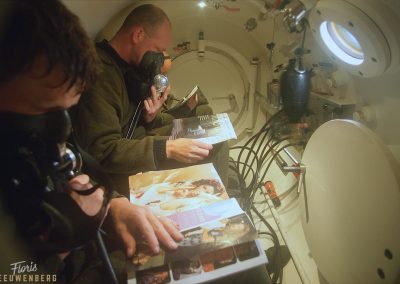 Divers in the decompression chamber need an extra air supply for the first 15 minutes.

Back to Action
DIVE PLATOON

The divers of the 105th Bridge Company of the Royal Dutch Army can blow up a bridge, or build one; they trace a murder weapon in murky waters and clear mines. They do practically everything an ordinary engineer does on land, except they do it underwater.