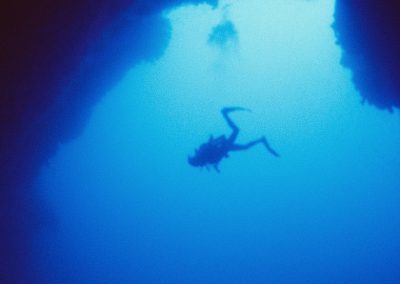 The Blue Hole at 65 metres

Going through the Blue Hole at 65 metres. Divers always descend in pairs and support each other underwater; this rule is universal, but when it comes to the Blue Hole the saying is, “Till 65 metres I am going to get you, at 70 metres you are on your own.” 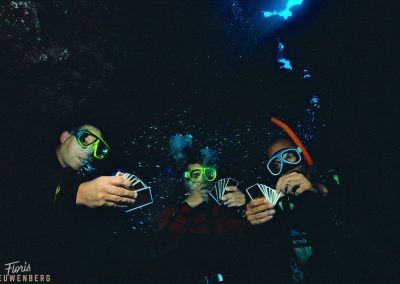 A game of underwater cards for decompression time .

A game of underwater cards to get through the decompression time which usually lasts around thirty minutes. 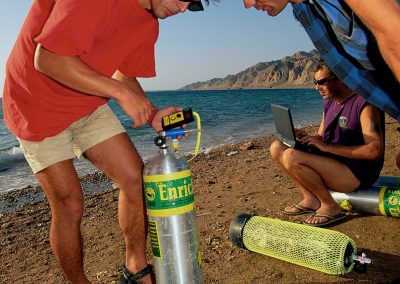 Percentage of nitrogen mix is being checked

The percentage of nitrogen in the air mix is being checked and the dive plan, which includes dive times and safety stops, is drafted with the support of a laptop computer. 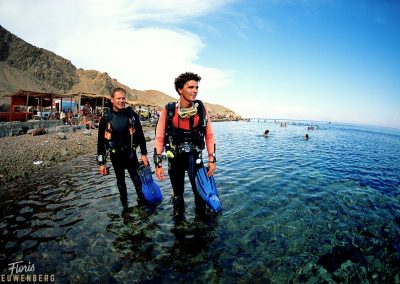 The Blue Hole is located inside a reef where snorkelers often enjoy the transparency of the water and the breathtaking view. 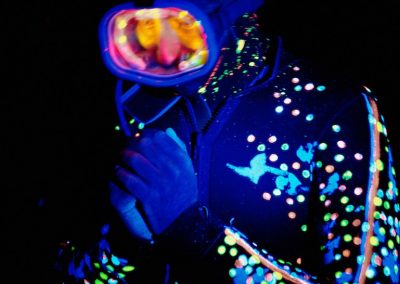 The Blue Hole is seen almost as religious experience

A diver in a fluorescent wetsuit praying and concentrating in the water. Many describe entering the Blue Hole as an almost religious experience. 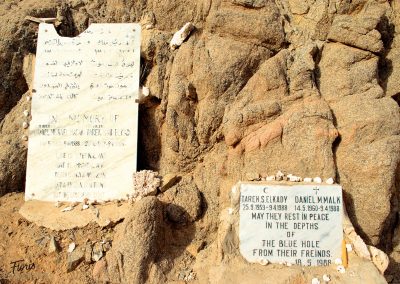 Two of the many gravestones placed by friends at the entrance of the cave to remember those, their number has reached one hundred, who did not make it back to the surface. 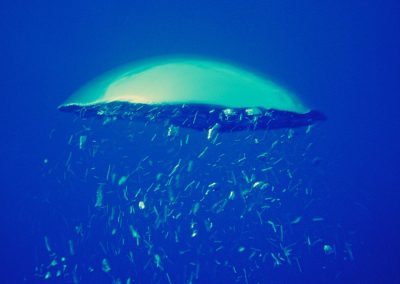 A breath of air at great depths

An air bubble – at great depths they are seen as the pearls or UFOs of the sea. 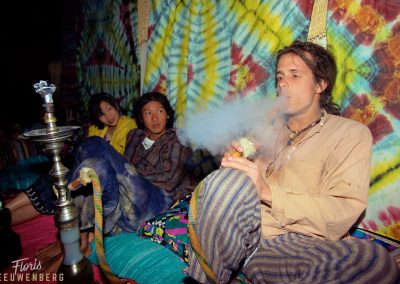 Water pipe smoking is a very common practice in Dahab and the divers too enjoy this local tradition. 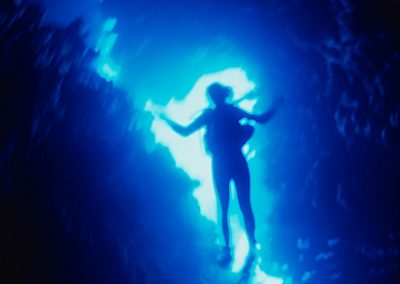 A narrow cave, close to the Blue Hole

A diver entering the niche at 58 metres, it is here that the bottom of the sea stretches into a narrow cave, the Blue Hole; at this depth orientation is difficult and the risk of nitrogen narcosis is very high. 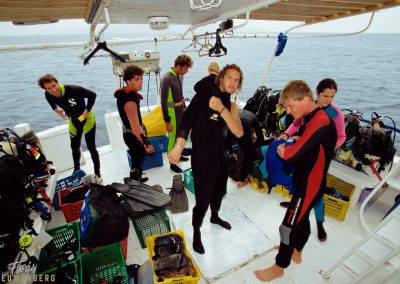 A group of extreme divers

A group of extreme divers, most of them diving instructors, waiting to descend. Out of the one hundred divers who lost their lives in the Blue Hole, 95 were professional divers. 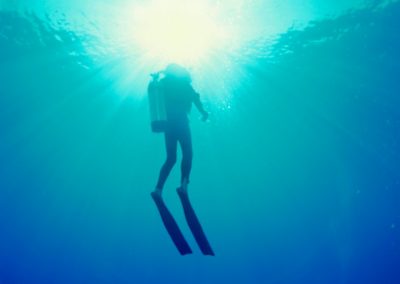 Back to the sun

Back to the sun, this is the magic moment when surface is regained. This special moment is usually spoilt by the decompression stop, which lasts between 10 and 15 minutes, and becomes a sort of anticlimax for divers. 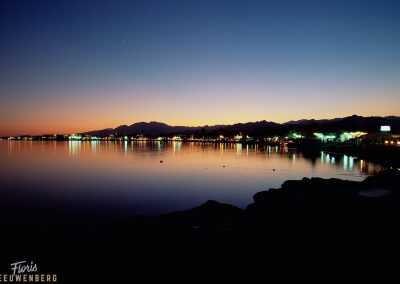 Skyline of Dahab at night.

View of the skyline of Dahab at night. 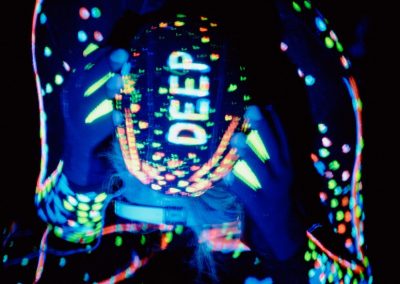 A pyschedelic diver in a fluorescent wetsuit. 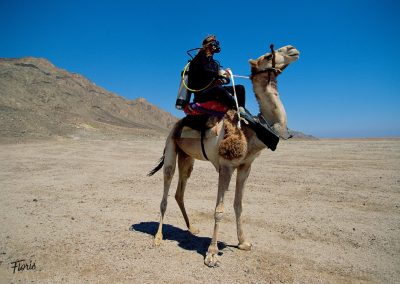 Full gear on a camel

A diver in full gear on a camel, this is one of the common ways to reach a diving spot. 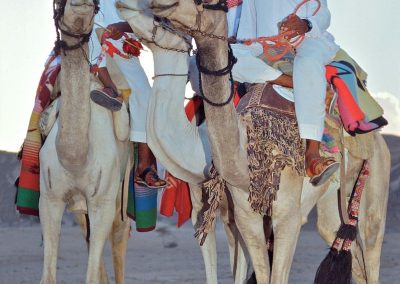 Bedouins are the local population

Amongst the local population there are Bedouins. They must think these ‘black latex guys’, who cross the desert in full gear are quite strange. 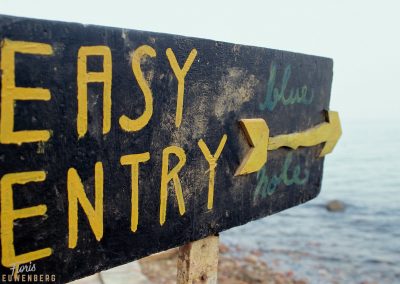 A sign on the beach shows the easy entry point for the ‘Blue Hole’ diving location. 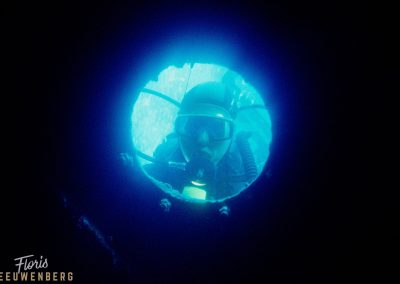 Looking for a way through a porthole of the SS Thistlegorm

Divers looking for a way in through a porthole in the wreck of the Tisselgarm, a British cargo ship well known among divers. 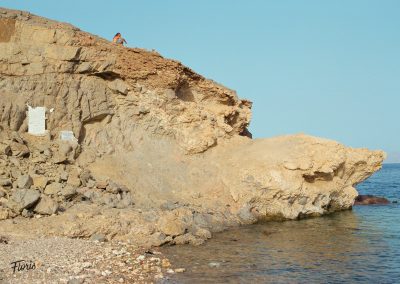 A diver on top of the hill where beneath gravestones

A diver in reflection on top of the hill where beneath gravestones have been placed to memorialise the divers who have lost their lives below in the ‘Blue Hole’. 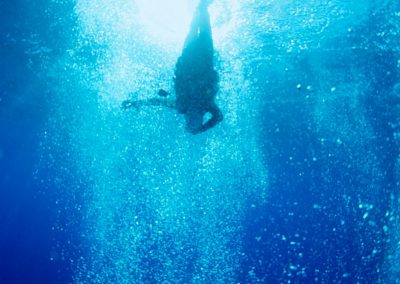 A ‘dancing’ diver waiting to descend

A ‘dancing’ diver waiting to descend as the air bubbles of the divers who preceded him are coming towards the surface. 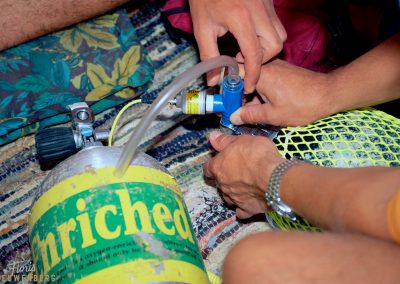 Mix of gasses is carefully measured

Before diving, the right mix of gasses contained in the bottles is carefully measured. When you dive at such depth the right combination of oxygen, helium and nitrogen allows you to remain for a longer time underwater. 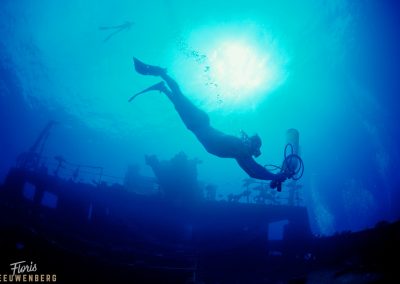 Diving technique allows you to go through smaller openings, in wrecks for example.

A diver who prefers to carry the bottle rather than having it on his back (skin diver); this diving technique allows you to go through smaller openings, in wrecks for example. 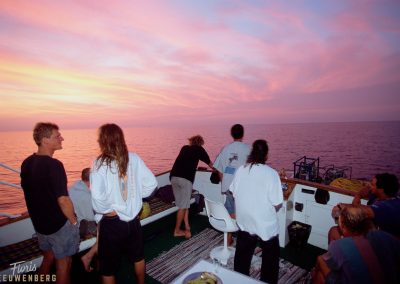 A ‘livaboard’ above a diving site

A ‘livaboard’ above a diving site – these ships take you apparently to nowhere in the middle of the sea, an expert as well as special equipment onboard can detect the exact spot where to stop. 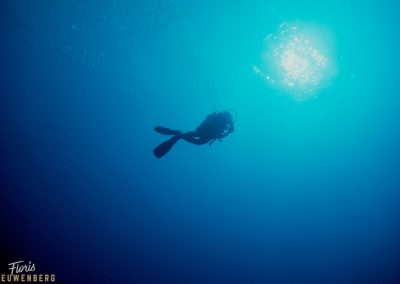 Patrick, one of the divers, is operating a decompression stop. One of the things that mostly attracts divers is the incredible sensation of weightlessness and the possibility of floating amidst endless crystal blue water. 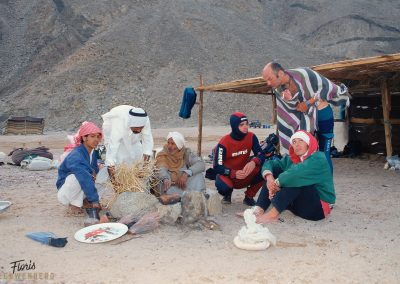 Bedouins preparing a meal after taking diving instructors to a dive in a remote spot. The local Bedouins know the most unspoiled areas for diving which are only reachable by camel. 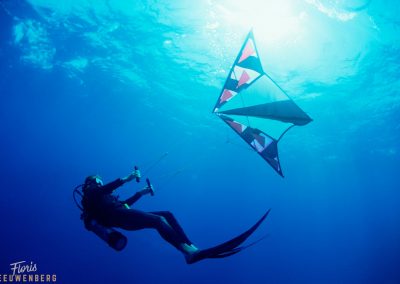 A diver testing one of the latest toys: an underwater current kite. 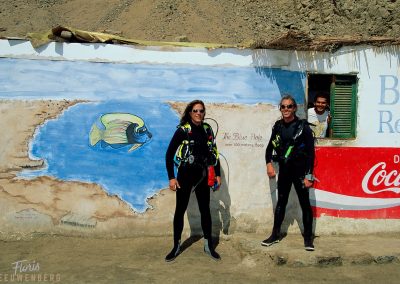 Two divers ready for their plunge into the infamous diving spot the ‘Blue Hole’ in Dahab, Egypt.

Big physical risks lure adventurers and thrill seekers to spectacular summits of mighty mountains or to daunting depths of salty seas. So too are ‘extreme’ divers drawn to a fathomless shaft in the Red Sea, which they have named The Blue Hole – a very dangerous cavity some 300 feet deep, where many a diver has drowned.  There is no official count but it is said that at least 150 scuba divers lost their lives in the last 10 years.